How to choose the best internet service providers in Malaysia

Internet speed has come a long way since dial-up. We're now able to video call our loved ones, play multiplayer online games, run an e-commerce business and stream HD movies, all without a hitch. And this is all thanks to the advancement of internet broadband technology coverage that now offers fibre unlimited internet plans that are affordable. With so many Internet service providers in Malaysia such as Unifi, Maxis and Celcom, how do you know who offers the best and fastest home broadband plan? How do you decide which deal to go for? To help you choose the ISP and speed that suits you, here's a quick breakdown comparing some of the best wireless, internet broadband and mobile plans as well as the best service provider out there. 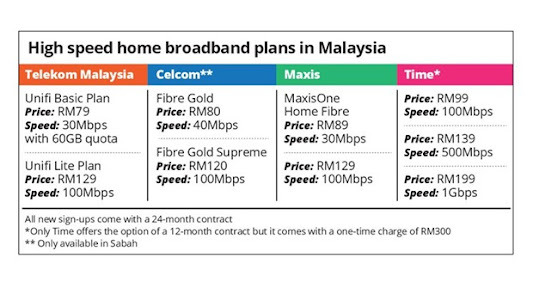 Whatever your preferences are, or how much of a value you are looking for, always choose the smoothest internet service provider that'll work stably in your home or living area.

Otherwise, if you have the privilege of choosing between brands, there are plenty of consumers out there that have their preferences. From this perspective, we'll briefly touch on how each of the best internet service providers performed accordingly to Malaysians.

You may see Celcom as either having reasonable or expensive deals. But there's one thing that many users (and even analytical studies) can agree on; it is the internet service provider with the widest and most stable coverage across Malaysia (on 4G availability).

According to several reviews, Celcom also provides the best reasonability for its terms & condition, as well as prices. For their unlimited plans, there is no hard quota limit, but bandwidth will be limited if abused.

2. Internet plan with the best speeds and latency: Maxis

This telco brand is one of Malaysia's most stable internet service providers alongside Celcom. Although their mobile plans with internet are slightly more on the pricier side for the amount of data you get, you cannot deny that their speeds and latency are one of the fastest and lowest, respectively.

By getting their unlimited internet prepaid pass (which will fall under Hotlink), you can enjoy not just good internet speeds, but also free calls and SMS plans; something that Celcom's similarly-priced deals doesn't have.

This title was closely tied with UMobile's internet plan choices, but we have to give it to Digi for their wider broadband plans to homes and mobile, as well as a wider coverage in Malaysia.

Digi may not always be the fastest in speed or the widest in coverage compared to the other two. But, it shines in its value, especially for urbanised areas. They have many deals that offer a high ratio of data amount to price and has lucrative lifestyle deals that can be enjoyed online and offline too. Plus, Digi's customers are often gifted with free top-ups in their plans.